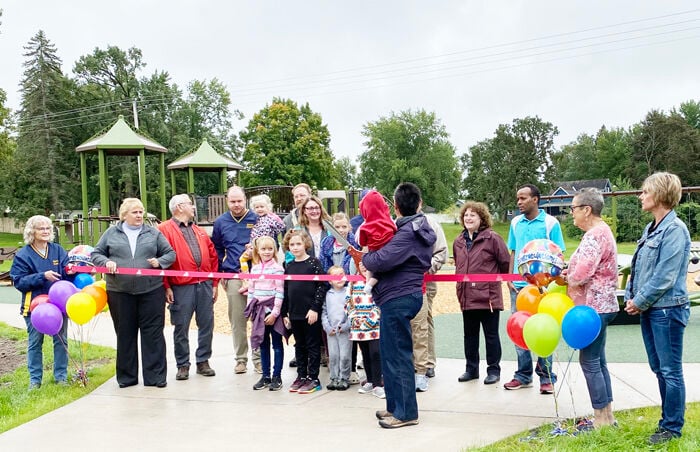 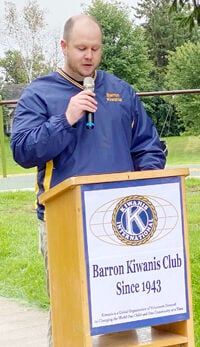 Andrew Sloan, Barron Kiwanis Club president, was master of ceremonies for the dedication of the Anderson Park playground Saturday, Sept. 12, 2020, at Anderson Park. 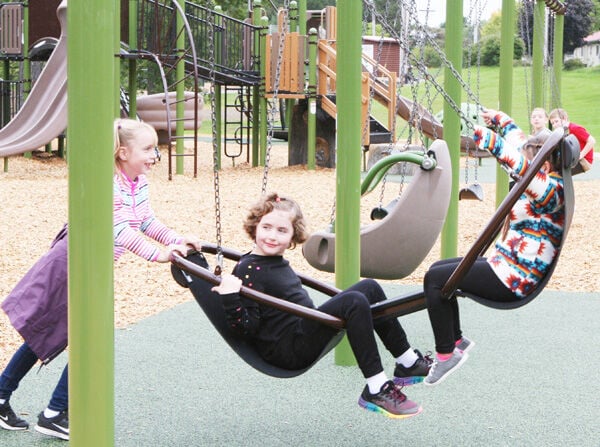 Andrew Sloan, Barron Kiwanis Club president, was master of ceremonies for the dedication of the Anderson Park playground Saturday, Sept. 12, 2020, at Anderson Park.

With about 50 citizens, public officials and members of two local service clubs in the audience, the Barron community dedicated a new, $400,000 playground Saturday, Sept. 12, 2020, at Anderson Park.

The idea started out in 2016, when local resident Maureen “Mo” Tollman, and some kids from her neighborhood, started a lemonade stand to raise funds for a structure to replace the older play equipment at the park.

In an address to guests at the ceremony Kiwanis Club president Andrew Sloan said the goal was to build something everyone can use, regardless of any challenge to his/her physical ability or movement

“We built a playground that knows no color, knows no socio-economic status, and knows no physical limitations,” he said. “This … is a safe place for all kids to simply be kids and play together.”

Donations came from more than 120 individuals and more than 60 businesses and organizations, added Sloan.

“Our funding came from … sources… of equal importance, from internationally awarded grants, to individuals, from local businesses, gifts in memory of loved ones, (and) lemonade stands. Every dollar mattered.”

When it came time to build the playground in late July, “100 volunteers contributed more than 700 combined hours of physical work,” Sloan added. Local businesses supported the cause as well.

Paying tribute to Tollman’s vision, Sloan said, “she started guiding our community down this path all by herself, and now she has inspired hundreds of people to get behind the cause with her.”

Steve Wojan, a retired New Richmond elementary school principal and Kiwanis Lieutenant Governor, praised the Barron community for the work it did to make the play structure a success.

“I’ve done a couple of these projects and I know how much effort it takes,” Wojan said.

Barron came back strong after it was the center of national attention during the tragic months of the Closs case, which began nearly two years ago, and the playground is further evidence of that comeback, Wojan added.

Later, Tollman had words of thanks for everyone who helped with the project, including local Kiwanis member Don Peterson. Referring to Peterson as “my partner in crime,” Tollman thanked him for pitching in to help with behind-the-scenes planning. She said the playground was the second time she and Peterson had joined forces – the last time being the city Skate Park, on the north side of the Yellow River.

Later, Peterson talked about how the playground planners were able to hurdle several problems, including the fact that the playground was located on a federally-designated floodplain, which added to the expense of building it.

The floodplain issue “and the … engineering probably cost us an additional $50,000 to $55,000,” he said. “One of our main goals was not to give the city a white elephant. Considering the location where the old tennis courts were and the soil type, the playground now sits on a very good base. We even had good comments on the base from the construction people, compared to other parks they have installed.”

Making the park accessible to all users – which included a set of springy, rubberized pads around all of the equipment – added another $50,000 or so to the cost, Peterson said.

Planners made sure they were buying a first-rate product, which also added substantially to the cost, he added.

Peterson said the new equipment is where it should be – in the main part of the park, near picnic shelters and shade trees.

“Our goal was to build a ‘destination playground’ and draw people from the surrounding area and bring more people into our beautiful community and park,” he said.