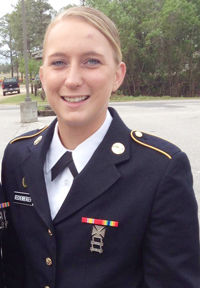 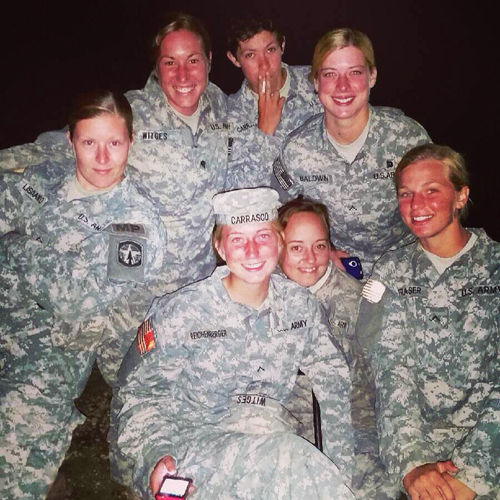 While flags are raised and rifles are fired in salute across Barron County next Tuesday, Nov. 11, to honor yet another Veterans Day, a “veteran of the future” will don a military police uniform and go to work at the vast Fort Bragg U.S. Army installation in Fayetteville, N.C.

Baillie Reichenberger, a 2013 Barron High School graduate, has been stationed at Fort Bragg for nearly a year.

As an MP, Reichenberger does a job that is “pretty much like any other police officer,” she said Monday, Nov. 3 “You have a patrol car, you carry a weapon. We police the fort and we are responsible for security at the gates. There are about 250,000 people (at the installation) every day.”

Her work shift goes from 1 p.m. to 9 p.m., and her workweek includes duty five days in a row, with two days off. That means she’s working weekends, on occasion, Reichenberger said.

“The training was similar to what you’d see at a police academy,” she said. “I trained for nine weeks in Missouri, where you learn pretty much the basics. When I got here, there was another two weeks of training so that we understood the regulations for this post. (The rules) differ from post to post.”

Once her Army responsibilities are fulfilled and she is a civilian again, Reichenberger said she would like to make police work her career.

“I chose the military police because it’s the best job I could pick if I were to come back to a civilian job – I hope I can just walk out of the service and into a police force in Barron County or someplace else,” she said in an interview shortly before she graduated.

“I haven’t had a lot of exposure to (law enforcement), but I have an uncle who’s a sergeant in the State Patrol.”

The career is part of the future. But for now, Reichenberger said that the important thing is to serve her country, and she has volunteered to do that.

“I applied for duty in Africa,” she said. “There are four companies in my battalion who are deploying there later this month.”

If she is picked to go, Reichenberger will help provide security for teams of doctors fighting the Ebola outbreak in West Africa.

Doesn’t that scare her?

“No, it doesn’t,” Reichenberger said. “I would love to deploy immediately. I want to go. I joined the Army for a reason, and this is what I want to do.”

If she is chosen, Reichenberger said that she will undergo medical security training so that she can avoid the disease while working in Africa.