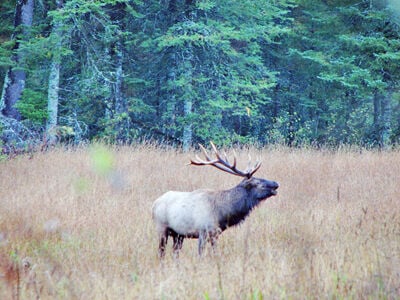 An elk is seen in northern Wisconsin. The state held its third elk hunt since 2018 last year. Five animals were harvested from the state’s northern herd. Reintroduction of elk in the state began about 25 years ago. 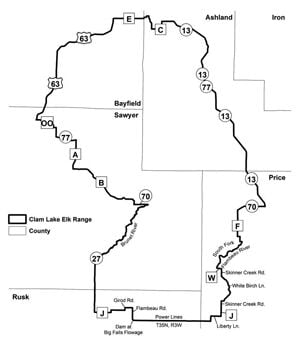 The Northern Elk Management Zone is the new state designation for the area of the state once referred to as the Clam Lake Elk Range.

An elk is seen in northern Wisconsin. The state held its third elk hunt since 2018 last year. Five animals were harvested from the state’s northern herd. Reintroduction of elk in the state began about 25 years ago.

The Northern Elk Management Zone is the new state designation for the area of the state once referred to as the Clam Lake Elk Range.

Five Wisconsin hunters each successfully bagged an elk during last fall’s state issued tag system. Three were mature bulls and two others were legal bulls. Only bull elk could be taken.

Last year was the third Wisconsin elk hunt since reintroduction efforts began in the state about 25 years ago. It was also the first time elk hunting was open south of Wis. 70, including portions of the Flambeau River State Forest in Rusk and Price counties.

Following a 3-month application period, the Wisconsin Department of Natural Resources randomly drew four lucky Wisconsin residents to have the opportunity to participate in the 2020 elk hunting season. Just shy of 28,000 Wisconsin residents entered the drawing for one of four once-in-a-lifetime elk tags. The winners were from the cities of Appleton, Junction City, Marengo and McFarland.

The fifth elk hunting license was awarded through a raffle conducted by the Rocky Mountain Elk Foundation. Raffle tickets could be purchased on the RMEF website, and the winner was drawn at the group’s state banquet in Wausau last July.

Only Wisconsin residents are eligible to receive an elk tag.

Last May, the Natural Resources Board approved a harvest quota of 10 bulls from the northern elk herd for the 2020 Wisconsin elk hunt, matching the number of tags from the 2019 season. Of the 10 tags, five were awarded to state hunters, and the Ojibwe tribes received an allocation for the remaining five elk in accordance with their treaty rights within the Ceded Territory.

The age structure of the elk harvested in 2020 was evenly spread out, according to Wisconsin Department of Natural Resources Wildlife Biologist Josh Spiegel in Hayward.

No elk were harvested in Rusk County, with the nearest being an elk taken about 6 miles north of the Rusk County line. The general location was about one mile north of where Flambeau River crosses County M in southern Sawyer County.

“That was the first elk taken on what we call the expanded range, or the southern lobe of the elk range. It is the first one taken in that greater Flambeau area, and it was also the first year that area was open for hunting.”

Hunt application numbers last year increased by more than 4,000 compared to 2019. For each $10 application fee, $7 is earmarked for elk management, habitat and research in the state. Donations totaling almost $11,000 were also received from the applicants.

The fifth tag was designated through a rules agreement for the Wisconsin Chapter of the Rocky Mountain Elk Foundation during the state’s first five elk hunts from a pool of about 1,800 people who entered.

The 2020 elk hunting season took place only in Wisconsin’s northern elk range in parts of Ashland, Bayfield, Price, Rusk and Sawyer counties, where the first restoration effort was initiated with 25 elk from Michigan in 1995.

Hunters who drew a tag were notified last June. Prior to obtaining a $49 elk hunting license, all winners were required to participate in a Wisconsin elk hunter education program offered in early September. The class covered regulations, hunting techniques and more.

One hunter was informed by a phone he was picked for an elk tag on his birthday, and did not believe the call.

“One of the more enjoyable tasks I have all year is calling the elk tag winners,” said Kevin Wallenfang, DNR deer and elk ecologist. “They are always super excited and usually say something like, ‘You’ve got to be kidding!’ This year it just so happened to be one winner’s birthday, and it took a few minutes to convince him that I wasn’t one of his buddies playing a joke on him.”

Another Wisconsin state hunter bagged an elk on their first ever animal hunting harvest.

“Last year’s hunters collected some very nice bulls and great stories of the hunt, so we’re looking forward to continued success within the elk program that provides more hunting and elk viewing opportunities in the future,” said Wallenfang.

State officials are planning some changes in the northern range herd through relocation of some Kentucky genetic elk from the southern end of the northern range to a location near the town of Clam Lake, where they are expected to disburse with the herd in that area.

“We released 92 elk between 2017 and 2019 on the Flambeau River State Forest. We are now going to pluck a few of those out and release them with the Clam Lake animals,” Spiegel said.

Historically, Wisconsin was home to a thriving elk population that was distributed throughout the state. By the late 1880s, elk were eliminated from the state due to habitat loss and unregulated hunting.

More than 130 years later, wild elk are once again inhabiting Wisconsin’s northern and central forests due to overwhelming public support and major partnerships between a variety of non-profit conservation groups, government agencies, tribal partners and thousands of conservation-minded individuals.

From a population of 25 elk reintroduced in 1995, and with the help of the second reintroduction efforts that started in 2015, the state’s total elk population currently numbers about 400 animals.

Elk are found in two distinct ranges in Wisconsin. The largest, and oldest, elk herd in the state is the Clam Lake elk herd currently numbering about 300 animals. The Clam Lake or “Northern” herd ranges across Ashland, Bayfield, Price, Sawyer and Rusk counties in northern Wisconsin. The other, the Black River elk herd, is found in the forested region of Jackson County in the central part of the state and currently numbers about 100 animals.

The value of elk is also reflected in the high level of public interest in the animal’s recovery. As the species has become more abundant, a growing number of people are visiting the elk management zones in hopes of catching a glimpse of one or hearing a distant bugle in the fall.

Schools are incorporating elk ecology, conservation and management into science classes and field trips, and tens of thousands of hunters submitted license applications with the desire to participate in Wisconsin’s first elk hunting seasons.

The restoration of elk to Wisconsin’s landscape has also provided broad benefits to the state’s natural resources and public user groups, such as hunters and wildlife watchers. Thanks largely to the presence of elk, thousands of acres of habitat enhancement, land acquisition and permanent land protection projects have been completed, benefitting a multitude of wildlife species while adding thousands of acres to Wisconsin’s public land base.

This public land is open to everyone and allows access for hunting, hiking, wildlife viewing and other uses. The improved habitat is not only beneficial to elk, but also greatly benefits species such as white-tailed deer, wild turkey, ruffed grouse and many non-game or rare species.

State officials set elk hunting quotas each spring. This quota has been set at 10 animals for each of the state’s first three elk hunts. Native American tribes are allotted 50 percent of this quota through ceded territory and treaty rights.

The elk tag application period for state hunters is March 1 to May 31.

Application fees have helped fund many additional projects in the state regarding elk habitat and research, according to Spiegel.

“Money is the limiting factor in how much we can actually do. Prior to us actually holding an elk hunt, we were drawing at strings from the Rocky Mountain Elk Foundation and other partners nationally. We have actually become self-reliant now. We can fund our own habitat projects, which is a huge deal,” Spiegel said.

“It is phenomenal. What we have been able to do the last handful of years greatly surpasses what we were able to do in previous years,” Spiegel said. “The previous pools of money we used to use are still available as well. It is not as if we are replacing a funding source. We are adding an additional funding source.”

The plan supports increased growth of the elk population but acknowledges that population goals may need to be adapted to address human conflict. Elk have occasionally caused damage to agricultural crops and property and have the potential to pose a threat to human health and safety

This plan also recognizes that elk have and will continue to cross outside of primary elk management zone boundaries, and that this behavior can be allowed under certain conditions without major action. Long-distance dispersal has not been a common behavior of cow-calf groups due to their small home range size, tendency to make short, local movements, and demonstrated lack of need to make seasonal migration-type movements.

Occupancy of habitat outside the primary elk management zone boundaries is more common for bulls, which frequently make short, seasonal movements, but normally return to areas occupied by cow elk during the fall breeding season.

As the elk population in Wisconsin continues to grow in number and expand in range, so do their associated challenges and opportunities. The Wisconsin Elk Management Plan, 2020–2030 is intended to guide elk management during this period of growth and expansion, to ensure that populations remain healthy, and the numerous values they provide are realized well into the future.

The program goal for elk management is to maintain a healthy, robust, and sustainable elk population that provides the ecological, social, economic and cultural benefits of elk while minimizing elk and human conflicts in Wisconsin.

One of the desired outcomes of this plan is to rename the current elk ranges to more broadly define the general location of each elk herd within the state.