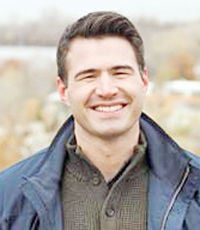 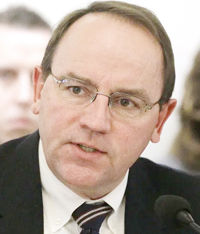 Two Republicans will face off in the Tuesday primary election, Feb. 18, with the winner advancing to a special election to fill a currently vacant Seventh District seat in Congress. They are current Wisconsin State Senator Tom Tiffany and Jason Church, an Afghanistan War veteran and former aide to U.S. Sen. Ron Johnson (R-Wis.)

Tiffany, 62, lives in Hazlehurst. He attended the University of Wisconsin–River Falls, where he completed a degree in agricultural economics. He owned and operated a river cruise company and worked as a dam tender. Tiffany was a town supervisor in Little Rice and served on the Oneida County Economic Development Board of Directors.

Church, 30, now lives in Hudson. He grew up in Menomonie and graduated from Menomonie High School in 2007. He attended the University of Wisconsin-La Crosse where he was a cadet in the Reserve Officer Training Program, graduating with a degree in political science.

Church, an aide to U.S. Sen. Ron Johnson and an Afghan war veteran, lost both legs in an IED explosion in combat. While recovering at Walter Reed Hospital from his military injuries, he met U.S. Senator Ron Johnson. Church graduated from Georgetown University with a Master of Arts in Security Studies from the School of Foreign Service and from Wisconsin Law School with a Juris Doctor.

The 7th District seat was last held by Sean Duffy, who resigned from Congress last September to spend more time with family as his newly-born daughter faced heart-related medical complications.

Tiffany has aligned himself with President Donald Trump saying on his website he will work with the president to keep America great and ensure prosperity and freedom for future generations. He lists issues of reducing the deficit and cutting spending, building a pro-jobs economy, protecting the unborn and draining the swamp. He also supports securing the southern border, defending the 2nd amendment, championing agriculture, supporting rural veterans, continuing energy independence, affordable health care, states rights, free and fair trade and delisting the gray wolf.

Church also has aligned himself with Trump, saying on his website he has been with the president since the beginning and will work with him to keep the national economy strong and the country safe. He lists issues of strengthening the military, cutting taxes and reducing spending, stopping illegal immigration, working for farmers and getting access to affordable health care. He also backs fighting for veterans, protecting the right to bear arms, regulatory reform, opposing abortion, fair trade and congressional term limits.

The candidates participated in a Wisconsin Public Radio debate broadcast on Thursday, Feb. 6.

Tiffany touted his small business ownership and work in the state legislature. Church cited his military leadership background. They agreed on many issues, each saying the federal deficit was out of control and raising taxes was not an acceptable way to lower the deficit. They agreed the Trump administration’s killing of Iranian Gen. Qassem Soleimani made Americans safer. They agreed proposals to expand the federal Medicare program to all Americans would devastate the U.S. health care system.

Church began the interview calling himself an outsider and citing his background in military leadership.

“I have made decisions, life or death decisions. That, for me, is what qualifies me to make those tough decisions in Washington,” Church said.

“Our way of life is under attack by elites out in Washington, D.C.,” Tiffany said.

Tiffany defined “draining the swamp” as reining in bureaucracy that regulates daily life. He cited a rule ordering a $13 million smokestack be added at a Rhinelander paper mill that had no effect on emissions. He said he agrees with Trump in eliminating two regulations for every one that is created.

“I will take that same expertise to Washington, D.C. to get that red tape that strangles businesses and individuals out of people’s lives,” Tiffany said.

Church called it an entrenched bureaucracy that has grown in Washington and needs to be shaken up by “throwing a couple of grenades in the swamp. He said it sometimes takes a different perspective other than individuals trying to climb the ladder of politics and becoming part of the system.

Both candidates called for more local health care options and less federal bureaucracy in the system.

Choice, competition and transparency is needed in health care, according to Tiffany. He said the Affordable Care Act has not worked, resulting in higher insurance premiums and less access to health care.

“Now we have the leading Democrat candidates for President who are talking about Medicare for all which will ultimately lead to Medicare for none because ultimately it will break the system. A better way is to bring control back to the state and local levels,” Tiffany said.

Church also said the Affordable Care has not worked, saying he opposes Democrats advocating for Medicare for all.

“The thought of this system being extrapolated on the entire country is frightening because at the end of the day the problem is you have providers who are not accountable to a patient but accountable to a bureaucrat in Washington. The solutions lie in more price transparency, they are really within the realm of the free market system,” Church said.

Church called the federal debt out of control, calling for steps to rein in federal spending within increasing taxes. Tiffany said the federal government must balance its books, citing the state that now has the largest rainy day fund in the history of the state.

“That always stymies growth. It stymies innovation, and it is counter-intuitive to the economy and prosperity that we have had in this country for centuries,” Church said. “My solution lies in looking at mandatory spending, looking at how those formulas are created and finding ways of removing the fraud and abuse that exists in these systems and reforming them in a way that is sustainable for decades to come.”

Tiffany said Wisconsin state government has fixed its financial problems and so should Washington.

“It is not necessary to raise taxes,” Tiffany said. “We reduced taxes in Wisconsin by $13 billion while balancing the budget. We can do the same at the federal level. It is going to take a concerted effort over the next decade to make that happen.”

Both candidates cited the recent passage of the passage of the United States-Mexico-Canada Agreement and ongoing trade talks with China as steps toward helping the state’s dairy industry.

U.S. Agriculture Secretary Sonny Perdue told the World Dairy Expo in Wisconsin last fall that, “In America, the big get bigger and the small go out.”

Tiffany noted his youth growing up on a 50-cow dairy farm and he understands the challenges faced by small farm operators. He is optimistic trade talks will have a positive impact on small farms in the state.

“There is a place for small farms here in Wisconsin,” Tiffany said. “I think we’ve seen a ray of hope here in the last month with what President Trump has done with the trade accords.”

Church praised state farmers, saying there are tough times and people are needed in federal government to understand tough times. He said he will be a fighter for farmers.

“With respect to Sonny Perdue, he’s not from here,” Church said. “He doesn’t know how tough we are here in northern Wisconsin.”

Both candidates oppose gun control measures such as universal background checks and red flag laws that can permit courts to order temporary removal of guns from those found to be a danger to themselves or others. Both pledged to defend the Second Amendment, and directed a question about mass shootings to a discussion of mental health programs.

“We’ve done something about this in Wisconsin,” Tiffany said. “I voted for additional funding for mental health concerns ... I think that’s very important.”

Church said the real question is mental health, noting guns have been in society for centuries and asked why have they become a prevalent talking point.

“We’ve gone away from the issues of ‘shell shock’ and post-traumatic stress disorder to realize that [mental health] is a problem and a wound that needs to be addressed, and we need to do the same thing in our societies and schools,” Church said.

“This man should have been gone a long time ago. President Trump’s decision has not destabilized us. It has made it more stable,” Church said. “Removing him was a step in the right direction, a step that would honestly provide more security in the area.”

The attack has created more certainty in the Middle East, according to Tiffany.

“President Trump, I believe, has taken a measured approach over the last few years with Middle Eastern issues, and when the Iranians killed an American he made it clear that is a line you shall not cross. That is something the previous administration did not do,” Tiffany said. “Soleimani was the chief architect of terror for Iran. He was very much a destabilizing force in the Middle East. He met his just desserts.”

Both candidates criticized previous administrations for not being hard enough on Russia and President Vladimir Putin.

Tiffany called Putin no friend of freedom loving people around the world, and someone who looks for any opportunity he can to destabilize other countries. He added Trump has been backing allies so they are able to fend off Russia.

“This president, President Trump has been much tougher than the previous president in dealing with Russia,” Tiffany said. “I believe this president understands who Russia is, and they are not our friend.”

Church praised Trump for pushing back against Russia.

“You don’t see the same aggressive behavior by Russia anymore. In fact what you are seeing is Russia now trying to scramble to figure out what they are going to do militarily,” Church said. “They are now sitting in a position where they see a president who is going to hold them accountable for their actions, and they are scared.”

When each was asked how he was different from his opponent in the race, Church said he never wanted to be in politics.

“I’m not trying to climb a ladder. I don’t want to do this forever. I am not a career politician. I’m someone who wants to serve in a time when we as a country need it most.”

Tiffany touted his life experiences, highlighting growing up on a farm, receiving a university degree, owning a business, raising a family and serving in the state legislature.

“I’ve seen the real world impact of government on my business and my friends and neighbors. I have taken that to Madison. I am a proven conservative and I will be the same out in Washington, D.C.” Church said.

In closing, Church cited his military leadership and growing up in a conservative family .

“I know the value we have here in Wisconsin, and I grew up in a conservative household with a mother who listened to Rush Limbaugh every day. I know that is the type of people we need in Washington to fight along with the president and be a warrior for conservatives here in Wisconsin,” Church said.

In closing, Tiffany called for Congress to get back to debating real issues, not impeachment. He called himself a proven conservative who will defend the Constitution and the Second Amendment.

“I will work with the president to drain the swamp out in Washington, D.C.,” Tiffany said.

Michael Opela Sr. was disqualified from the Republican primary and is running as a write-in candidate.

In the Democrat primary for this seat, Lawrence Dale and Tricia Zunker are running for the right to advance.

The special election for this seat will be held Tuesday, May 12.