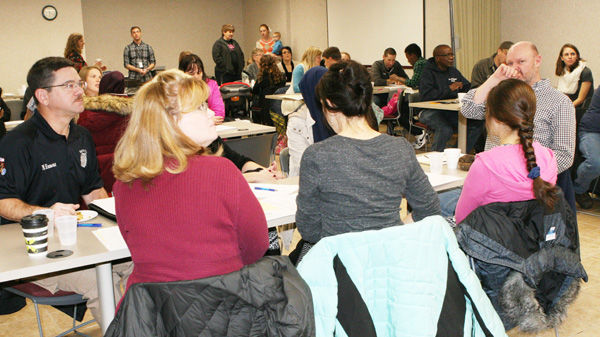 An estimated 40 people signed up for a three-hour seminar on Somali culture held Saturday, Dec. 2, 2017, at the Barron County Government Center. 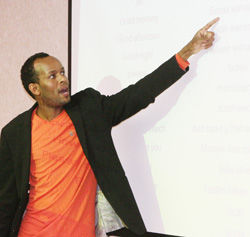 An estimated 40 people signed up for a three-hour seminar on Somali culture held Saturday, Dec. 2, 2017, at the Barron County Government Center.

The word on the projection screen was “Fican.” The phonetic pronunciation next to it was “FEE-yan.”

And yet, when Isaak Mohamed actually said the word, it sounded more like FEE-han,” the “e” sound and the “y” sound sliding together, almost as if they were combining to make an “h” sound.

“It means ‘fine,’” Mohamed explained to a room full of people on the ground floor of the Barron County Government Center on Saturday morning, Dec. 2, 2017.

“If you ask someone how they are feeling, they might say FEE-han,” he added.

This pronunciation session took place during the second of a three-hour seminar entitled “Somali 101,” organized through the cooperation of the Barron County office of the University of Wisconsin-Extension, and The Well Ministry, a Barron-based consortium of local church members.

Approximately 40 people attended the session. For three hours, with the help of guest instructors, the Barron group delved into Somali culture and history, examined the language (a speech with both African and Asian roots), and discussed the unrest on the Horn of Africa which has driven thousands of Somalis from their country, first to refugee camps and later to the U.S. (including Barron, home to an estimated 600 to 800 Somalis, most of them refugees).

The session on pronunciation gave the “students” plenty of opportunities to interact with one another.

Mohamed asked them to separate into groups and repeat the phrases to one another, as he worked his way down the list of terms:

A hand went up from the audience, and Mohamed paused to listen to the question.

“How do you say, ‘I speak little Somalian?” the questioner said.

There was laughter after that exchange.

Kim Frandsen, one of the guest instructors and a teacher at Barron High School, offered some perspective on the effort to master some of the more difficult Somali expressions.

She said that despite the language difficulty, Somalis tend to feel “pleasantly surprised and feel welcome” when they’re greeted in their own language.

He said the best part of the program was the chance to meet and talk with local Somali residents.

One of the main take-aways from the seminar was a clearer understanding of the needs of Somali residents, Kazmierski added.

The dialog ought to continue, Kazmierski said.

“From what I understand, another outreach program is being planned,” he said. “These programs should be consistently delivered (at least annually) to create better awareness and for relationship building.”

Barron Police Chief Byron Miller, who also attended, said the program included “many things I was already aware of, but it was interesting to listen to Isaak explain the history and progression of Somalia.”

As the spouse of someone from the Philippines, “I have a pretty good understanding of the immigration process and the adjustment to all kinds of changes,” he said.

“It was nice having the (Somali) words and phrases listed, and to be able to practice saying them,” he said.