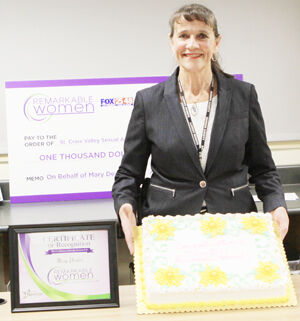 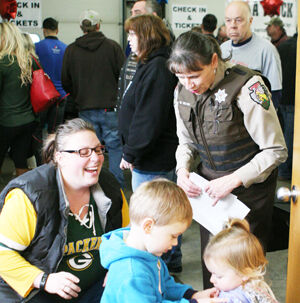 Barron County Sheriff’s detective Mary Dexter hands out official police badges to Mac and Bre Stevens, children of Beth & Lucas, all of Cameron, at a community gathering fundraiser held Jan. 22, 2017, at Cameron for the family of the late Dan Glaze, a Rusk County deputy killed in the line of duty on Oct. 29,2016.

Barron County Sheriff’s detective Mary Dexter hands out official police badges to Mac and Bre Stevens, children of Beth & Lucas, all of Cameron, at a community gathering fundraiser held Jan. 22, 2017, at Cameron for the family of the late Dan Glaze, a Rusk County deputy killed in the line of duty on Oct. 29,2016.

Remarkable is not a new word when it comes to talking about Mary Dexter.

Well-respected as a police investigator, athlete and community servant, Dexter was recently featured as one of 100 ‘Remarkable Women’ by Nexstar Inc., a media company with almost 200 TV broadcast stations across the country, including a western Wisconsin Fox affiliate.

Dexter’s remarkable career dates back to 1977, when she became Barron County’s first female dispatcher and jailer. She achieved many more firsts along the way, has earned several honors and all the while been a determined advocate for justice.

Dexter was WLAX/WEUX’s local winner of the Remarkable Woman award, which includes $1,000 to donate to a local charity.

Dexter works closely with the organization as an investigator who focuses on sexual assault cases.

Dexter quipped, “I still have my kidneys, but I’ve lost little pieces of my heart over the years.”

Dexter is known for her dedication in investigating cases and for her compassion in advocating for victims.

“A lot of it is taking time and listening to what they have to say,” she said. “I don’t want to use the word victim too much as I want that to be a temporary word—I generally want to assist the person, helping them restore their dignity and power and giving them a voice and future.”

“They don’t want pity, they want compassion,” said her husband, Bill Dexter, who is retired from the sheriff’s department. “Mary doesn’t stand in front of them, she doesn’t stand behind—she stands with them.”

Part of the healing process is making sure justice is done, too.

Dexter goes to painstaking lengths to gather all the evidence she can and make a case.

“I try to make it a complete picture so it’s understandable,” she said.

Shaped for the role

Dexter’s local upbringing, faith and athletic pursuits are very much at the foundation of her skill and passion for helping people.

“My life experience leading up to this has helped in investigations,” said Dexter.

She was born Mary Keilholtz—her father Duane Keilholtz passed away before she was born. Her mother, Esther, remarried Ervin Skjerly, who himself was a widower, and eventually grew to become a family of 13.

“It was a yours, mine, ours family,” said Dexter. “They were God-loving, wonderful people who had been through tragedy. They knew hard times, but did so much to make life good for us.”

Dexter said she benefited from the passage of Title IX, a 1972 law that prohibits sex-based discrimination in federally funded schools.

She became a standout athlete at Barron High School, earning trips to state in track and as part of the volleyball team.

“It made a big difference in my life,” said Dexter.

While she could play any sport she wanted, her parents insisted she must sing in the choir too.

Music and athletics have remained an important part of her life.

She sings for her church, Faith Lutheran in Cameron, where some call her “Microphone Mary.”

Always competitive, Dexter has won medals running in the Badger State Games and has played in volleyball and softball leagues for 50 summers.

Sports has long been an outlet from the stress of the job, but also a factor in her success in law enforcement.

“Law enforcement is a lot like sports in the team approach, but it takes self-drive, too,” said Dexter.

She considered being a physical education teacher and enrolled briefly in accounting after high school. But after looking through some books of a boyfriend enrolled in the Chippewa Valley Technical College police academy, she too became interested.

After graduating, she applied for an opening in the Barron County Sheriff’s Department in 1977 and was hired as a dispatcher and jailer—then for only occasional female inmates.

Bill joined the department a year later. They married in 1982.

After 13 years as a dispatcher, Dexter moved to patrol. She did that for seven years before becoming a detective, which she has done now for the past 24 years. She also served many years on the Emergency Response Team, up until last year.

Dexter has worked on a variety of cases, including murders, but has become primarily an investigator of sexual assaults and crimes against children.

Dexter said there have always been a lot of these kinds of cases, unfortunately.

“To victims, whether they do or don’t report it, I want them to know that it’s not their fault,” said Dexter.

Modern technology has been a help and a cause for concern.

“There’s a lot of people who have addiction to pornography, or worse yet, child pornography. It’s so accessible over the internet,” said Dexter.

But newer technologies and more modern training is helping fight back.

Physical evidence can be crucial, which is why organizations like St. Croix Valley Sexual Assault Response Team are so important. The SART provides medical exams, forensic evidence collection, education and advocacy for survivors of all ages of interpersonal violence, strangulation, human trafficking and sexual exploitation in the counties of Barron, Pierce, Polk, and St. Croix. There is an office in River Falls and in the Marshall 12 building in Rice Lake. For more information, call 715-425-6443.

Of course, as always it’s the commitment of men and women in blue, who remain essential to achieving justice.

“There’s a lot of smart and capable men and women in law enforcement,” said Dexter. “Everyone who gets into it does it with a heart of service.”

A couple cops in the new generation of law enforcement are Dexter’s own children, Emily Anderson and Will Dexter.

“I’m very proud of them,” said Dexter, who is by her nature much more willing to brag about others rather than herself.

But there is no shortage of people who will put in a good word for Dexter.

“We are very excited and honored that detective Dexter received this award,” said Barron County Sheriff Chris Fitzgerald, the sixth sheriff Dexter has served under. “For over 43 years Mary continues to serve the Citizens of Barron County, especially the victims. She makes these hard, complex cases easier for the victims in these types of cases.”

Part of the reward for Dexter is to run into some of the people she has helped down the road, after they have gotten married, have children and live full lives.

As always, Dexter emphasizes that success in her line of work comes as a result of a team effort. She said she has stayed with the department so long because of the camaraderie she has with her colleagues and the fact that she just enjoys living in Barron County.

“As far as the Remarkable Woman award, I feel like it is really due to being willing to work hard and to treat people kindly, out of love and thanks to and for God and our family, as well as my past and current fellow workers, social workers, district attorneys, Danette Hellmann (who makes our reports look so professional), and so many other people from whom I continue to learn.”