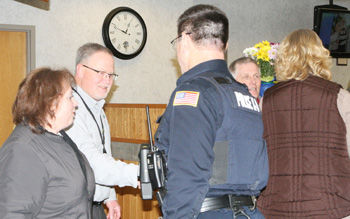 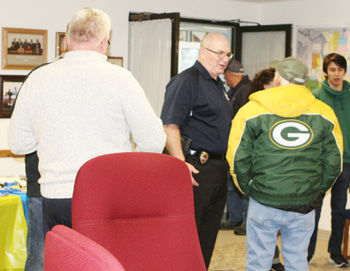 On New Year’s Eve, retired Barron Police Chief Byron Miller and his wife, Luzita, made cell phone contact with relatives across the Pacific Ocean in the Philippines (Luzita’s home country).

“We’ve been back to her hometown only once in 28 years,” Miller said Tuesday, Jan. 7, 2020, four days after he retired from a long career with the City Police Department.

Although Luzita is still working, retirement may offer an opportunity for the Millers to travel to her home country and re-connect with relatives, he said.

In the meantime, Rick Rassbach, former branch manager at WESTconsin Credit Union, Barron, was making plans to do some ice fishing on Lake of the Woods.

Both Miller and Rassbach happened to celebrate their retirements on the same day Friday, Jan. 3.

After 33 and one-half years with Menomonie Farmers Credit Union and its successor, WESTconsin Credit Union, “it will take some time getting used to retirement,” Rassbach said Monday, Jan. 6.

Hired in July of 1986, Rassbach and his wife, Judy, both Eau Claire natives, moved to Barron from Fort Wayne, Ind. They lived 13 years in Barron, and spent the next 20 years at a home between Hillsdale and Prairie Farm.

“We’ve had opportunitiess to move elsewhere, but we’ve chosen not to,” Rassbach said. “We consider Barron our home, and have spent more than half our lives here. We won’t be moving away.”

Besides fishing, Rassbach said he also enjoys hunting and golfing, and will continue with both hobbies in retirement.

“There are eight to 10 regulars I spend time with at Rolling Oaks,” he said.

Rassbach asked his successor, Tammy Jackson, to consider taking on the job he was doing with the Barron Downtown Council. The group worked with the Barron City Council to plan a proposed $6 million, six-year renovation project for the La Salle Avenue business district.

“I see some great opportunity for Barron when the (renovation) happens,” he said. “I’ll definitely be watching the process.”

On Tuesday, Jan. 7, Miller said he had decided to start retirement by running for office. He said he was circulating nomination papers for an at-large seat on the Barron City Council.

“I have had a really rewarding career, and we have a great community, which is why I want to continue in some capacity,” he said

Miller said he and Luzita had no plans to move away from Barron.

“We have a son who’s a (high school) freshman,” Miller said. “We’re also looking forward to spending time with the family.”

The Millers have two grandchildren living in Rosemount, Minn., he added.

Things have changed over the years he has been involved in law enforcement, Miller said.

“Marijuana was the biggest drug we dealt with when I started out, and alcohol, too,” he said. “Nowadays 60 percent of the traffic stops are for drugs rather than alcohol.”

Miller said he spent the final years of his career involved in the Closs case, “something most of us in law enforcement had never encountered – and a shock to the whole community.

“One of the proudest memories I have is the cooperation of all the (law enforcement) agencies in the area in that case,” he added.