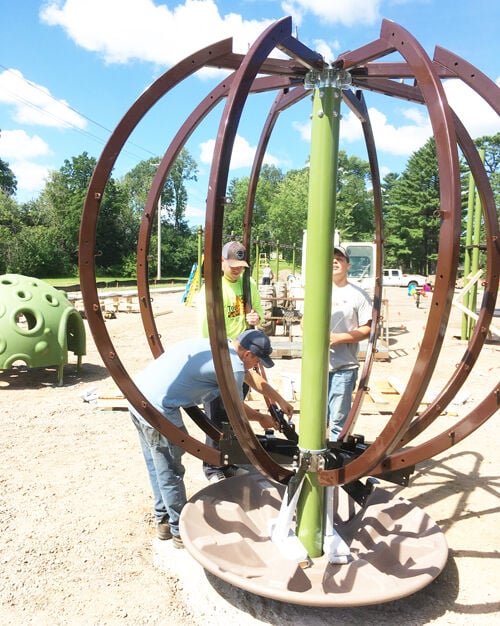 Area residents Andrew Sloan (center) flanked by brothers Zach and Sam Beckendorf, work on a structure known as a “globe spinner” at Anderson Park on Thursday, July 30, 2020. They were among scores of community volunteers who helped construct a new, $400,000 play facility in the park. Photo by Bob Zientara 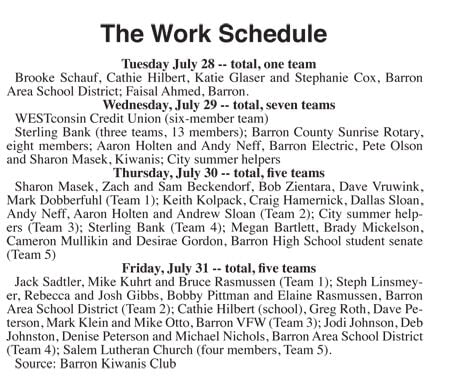 Area residents Andrew Sloan (center) flanked by brothers Zach and Sam Beckendorf, work on a structure known as a “globe spinner” at Anderson Park on Thursday, July 30, 2020. They were among scores of community volunteers who helped construct a new, $400,000 play facility in the park. Photo by Bob Zientara

Things get done when a lot of willing hands pitch in, and when people set a goal and don’t give up when obstacles get in the way.

Dozens of volunteers proved that last week when they showed up at Anderson Park for three consecutive days to assemble a massive, new play structure in the middle of the park property.

It took a lot of teamwork to build the structure, and it took a lot of invisible effort from others who invested untold hours of time to plan and organize the work crews.

As one of those volunteers, I discovered someone had put a lot of thought and planning into the project.

First were the detailed instructions emailed to us in advance. If it hadn’t been for that message, I wouldn’t have remembered to put on a pair of heavy-duty boots. And I wouldn’t have brought along a power drill (which we never used) or my set of socket wrenches -- which we used a lot.

Our work crew included Barron Kiwanis members Andrew Sloan and Sharon Masek, along with the Beckendorf twins, Zach and Sam, and me.

We were supposed to frame out something called a “globe spinner.” It’s a rotating sphere, about 10 feet in diameter, suspended from a central pole. There are two platforms where kids can sit, and rope handles for parents to grasp as they turn the globe around and around.

The biggest challenge was finding the right parts, fasteners, and hardware. Some were easy to recognize. Others were not so easy. They had strange names and shapes, and they were hiding in various places. Some had been inadvertently grouped together with parts for other pieces in the collection of structures and towers, swings and bridges, slides and panels.

It took the five of us about 90 minutes to find, sort and carry the parts and hardware to the place where a huge metal pole was anchored in concrete – the main support for the globe spinner.

By noontime, we had managed to build the main superstructure -- with occasional help from Doug Reimer, one of three professionals working for Gerber Leisure, a company from Mount Horeb, Wis., that installs playground equipment.

Other Gerber representatives were George Welzien and Jordan Rickey.

Our team broke up after lunch, when three members (myself included) had to leave. Later, while looking at the Friends of Anderson Park Facebook page, I was happy to see that other volunteers had the globe spinner the day after we started. That 90 minutes of hunting paid off for the next group of volunteer builders.

The Facebook page is managed by Barron resident Maureen “Mo” Tollman, who helped generate public interest in the play structure over the past several years. She was on hand each day of the community build.

Our experience at the park was just one example of the kinds of cooperative effort that made the project a success.

According to Kiwanis members Don Peterson and Andrew Sloan, this was a regional, community process that included willing hands, cooperative fundraising, and, also, a fortunate coincidence.

Sloan took charge of the project more than a year ago, and, to help raise more funds, he pitched the idea to the Barron County Sunrise Rotary Club. The club (which meets in Rice Lake), not only agreed to support the Barron project, but took the idea to other Rotary Clubs, in hopes they’d contribute, too. The campaign was a success.

Peterson estimated that when the fundraising is complete, Sunrise Rotary and the other clubs will have contributed about $25,000 to the project.

The fortunate coincidence happened after Barron Kiwanis decided to take on the play structure as a club project. By early 2019, a lot of fundraising had already taken place, Peterson said. That’s when club member Pete Olson noticed that Kiwanis International had an annual event that invited individual clubs to compete for a $25,000 grant.

Known as “Legacy of Play,” the competition was held with the cooperation of Delano, Minn.-based Landscape Structures, Inc.

At about the same time, Barron Kiwanis was trying to pick a manufacturer for the Anderson Park structure -- and, ironically, had chosen Landscape Structures, without knowing about its involvement with “Legacy of Play,” Peterson added.

Barron Kiwanis won the grant in June 2019, after the community organized a massive online voting campaign with the cooperation of hundreds of Barron residents, groups, organizations and churches.

The city of Barron later agreed to contribute $125,000 to the project.

Peterson said that the total cost for the structure will be about $400,000, including the play apparatus, an elevated base that includes well over 1,000 cubic yards of sand and crushed concrete, and landscaping.

Besides the largest contributions from the city, Kiwanis and Rotary, the rest of the cost will be covered by hundreds of donations from businesses and individuals – right down to some lemonade sales organized by Tollman and her neighbors several years ago.

Organizers hope to dedicate the play structure during the Barron Fall Festival in early September.