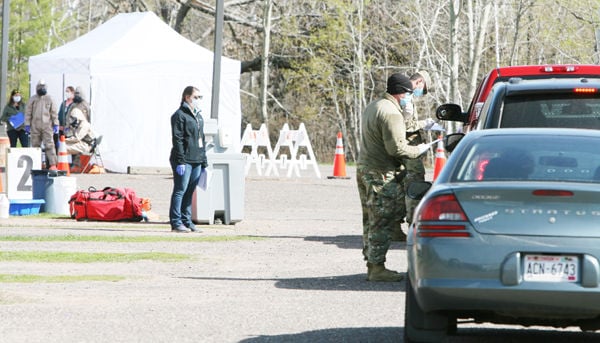 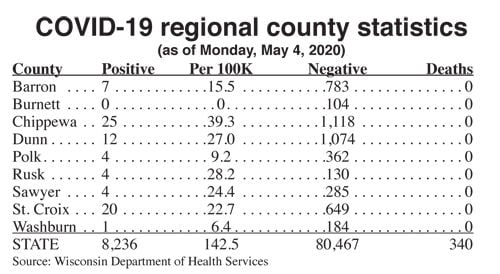 Along Tamarack Street in the village of Turtle Lake on Monday, May 4, 2020, uniformed Wisconsin National Guard troops opened their COVID-19 testing station for the second day in a row.

But as the 10 o’clock hour approached, no one had shown up for at least 15 minutes. The small talk revolved around the recent Wisconsin fishing opener and the high winds that had discouraged anglers over the weekend.

Things quickly changed, however, when a red pickup truck pulled into the campground. Members of the Guard contingent approached the truck to talk with the driver and set up the test.

The truck was soon followed by half a dozen other vehicles, some with more than one passenger.

That steady stream of visitors was to go on the rest of the day. According to the Barron County Department of Health and Human Services, a total of 230 people were tested at the Turtle Lake facility on Sunday and Monday, May 3-4, including 122 Barron County residents.

As of 3:45 p.m. Tuesday, May 5, the county reported no positive tests, although the information was subject to change.

“These numbers may fluctuate a little as we (review) the consent forms, which state the (patient’s home) county,” Laura Sauve, public health program manager and county health officer, said late Tuesday afternoon, May 5.

She said that when the actual test results are entered into the online disease management system, the home address might change the county of residence.

Reaching for a goal

As the vehicles began to line up Monday morning, Gabe said: “This is kind of what it was like all day yesterday (Sunday, May 3). Since we opened this morning, we’ve seen about a dozen vehicles.”

More than two dozen members of the National Guard were on hand to conduct the tests, according to Gabe and Fitzgerald. There were enough soldiers to allow them to rest or work in shifts.

The soldiers “seem to be here from all over the state,” Fitzgerald added. “There are 15 teams working in different locations all over Wisconsin.”

The goal is to meet a benchmark of 85,000 tests per week, a precondition set by Evers to warrant the reopening of a “normal” state economy.

In the press release, Wisconsin Department of Health Services (DHS) Secretary-designee Andrea Palm said the expanded testing is critical to reopening the state.

“To turn the dial in Wisconsin, we have to test everyone with symptoms,” said DHS Secretary-designee Andrea Palm. “From there, we move to contact tracing and getting those exposed to the virus in quarantine. Anyone with symptoms that include cough, shortness of breath, fever, chills, repeated shaking with chills, muscle pain, headache, sore throat, new loss of taste or smell please call your provider and get tested.”

Contact tracing works to identify close contacts of the case to either:

• Quarantine those without symptoms for 14 days after their last contact with the case, or

• Refer close contacts with symptoms to their health care provider for testing.

In the meantime, Mayo Clinic Health System-Eau Claire is gearing up to treat COVID-19 patients, according to Kristin Everett, senior communications specialist with the Eau Claire office.

Everett was asked if Mayo plans to make use of donated personal protection equipment secured from a province in China by the University of Wisconsin-River Falls.

“At this time, Mayo Clinic Health System’s PPE supply chain is stable and we do not anticipate applying for any future shipments from the Strategic National Stockpile (SNS),” Everett said Monday, May 4.

“However, if we do need accommodations, all counties have a process in which healthcare organizations submit a request through the County Emergency Manager to request and acquire those supplies, rather than those provisions coming directly from the state.”

On Saturday, the state announced it was setting up a facility to decontaminate respirators used by regional medical facilities to treat COVID-19 patients in Barron and other regional counties.

On Monday and Tuesday, May 4 and 5, industrial hygienists from the Wisconsin State Lab of Hygiene (WSLH) spent time in Sawyer County building the unit and training local staff to be able to run and utilize it.

At this point at least 15 volunteers have been trained and will be able to run it, using the WSLHs best practices.