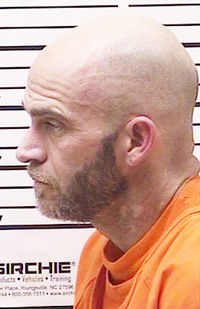 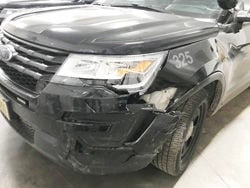 A Barron County Sheriff’s deputy was uninjured when his squad car, above, was rammed by a suspect vehicle following a high-speed chase early Sunday, Jan. 13, 2020, near Chetek. After Whitehead hit the county squad, he stopped before hitting a police squad from the city of Barron that was blocking his path. A Barron officer joined the chase at 17th Street and County “W”.

A Barron County Sheriff’s deputy was uninjured when his squad car, above, was rammed by a suspect vehicle following a high-speed chase early Sunday, Jan. 13, 2020, near Chetek. After Whitehead hit the county squad, he stopped before hitting a police squad from the city of Barron that was blocking his path. A Barron officer joined the chase at 17th Street and County “W”.

Formal charges were pending Tuesday, Jan. 14, 2020, against a 43-year-old Sawyer County man after a high-speed chase in Barron County early Sunday, Jan. 13, that resulted in a collision with a sheriff’s squad car, according to Barron County Sheriff Chris Fitzgerald.

If convicted, he could face penalties of up to five years behind bars and/or fines of up to $13,600.

In a Jan. 13 press release, the sheriff said Whitehead was taken into custody after a 13-mile chase that began in Cameron, headed west toward Barron, then went back east again before ending on County Hwy. SS in the city of Chetek.

A woman passenger in the suspect vehicle was released and was later taken to a residence in Rice Lake, dispatch records said.

According to county Circuit Court records, this isn’t the first time that the suspect has fled from police.

In August 2015, Whitehead, then of Bruce, was captured after a 100-mph car chase and a pair of foot chases south of Barron in an incident that stretched over parts of two days.

Barron County dispatchers were alerted about an active chase at 4:12 a.m. Sunday, Jan. 12. The incident began in Cameron near Fourth Street and Bowl Avenue.

A Barron County Sheriff’s deputy reported a vehicle that blew through a stop sign and had expired registration. It shut off its lights and fled west at 70 mph on Main Street, then headed out of town on County Hwy. W.

Law enforcement deployed spikes near Hwy. W and U.S. Hwy. 8, not far from the Barron city limits. A Barron officer went to that location to help. But then, the deputy who started the chase reported the fleeing car was now going east on U.S. Hwy. 8, at an estimated speed of 100 mph. It then went south on Hwy. SS. At one point, the fleeing vehicle was in the wrong lane, and oncoming (northbound) traffic on Hwy. SS was forced to move over to avoid it.

A second set of spikes was set up at County Hwy. SS and Parker Street, Chetek. The suspect vehicle struck the spikes. It then slowed, then rammed the county squad head-on, dispatch records said.

An officer reported the suspect was being held at gunpoint at County Hwy. SS and Pinewood, Chetek. The suspect vehicle was taken to the Justice Center impound garage. On Monday, Jan. 13, Fitzgerald said photos of the suspect vehicle couldn’t be released yet because the investigation was still active.

Barron Police Department logs indicate that a city officer helped with the chase, first deploying to a location close to the intersection of County Hwy. W and U.S. Hwy. 8. The city officer was also involved in the ensuing chase from Barron to Chetek, and helped to block the suspect vehicle after it rammed the county squad car.

At the time of the Jan. 13, 2020, incident, the suspect already had a felony conviction for fleeing and eluding on his record, according to Barron County Circuit Court records.

Whitehead, then of Bruce, allegedly fled police near the corner of Wisconsin Hwy. 25 and County Hwy. U, south of Barron, on the evening of Aug. 26, 2015. The ensuing chase led officers along paved and gravel roads at speeds estimated in excess of 100 mph. Eventually, officers found the vehicle abandoned on County Hwy. D west of Hwy. 25.

Officers used a K9 partner and found a woman lying on the ground in a wooded area near Hwy. D. She allegedly identified Whitehead as her companion.

Police deployed more dogs and a drone, but couldn’t find the suspect.

The next morning, Aug. 27, 2015, a citizen phoned police to report having spotted a man riding a bicycle on Hwy. 25. The caller had seen the sheriff’s Facebook page, and thought that the cyclist looked like the suspect.

Two deputies were on their way to the scene when another caller reported seeing a man riding a bike west on County Hwy. D. Officers saw the cyclist, who jumped off the bike and ran into a nearby wooded area.

A man later identified as Whitehead was found lying face down along a wooded fence line near the road.