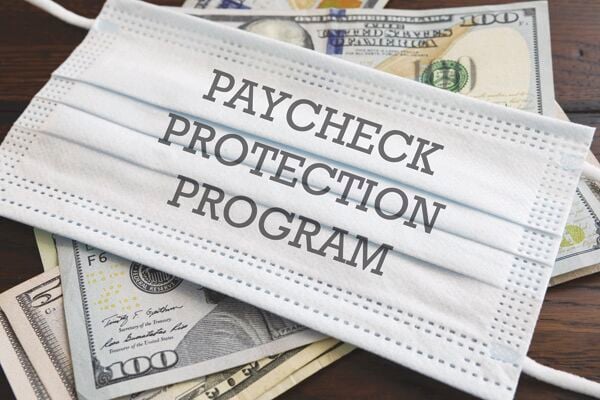 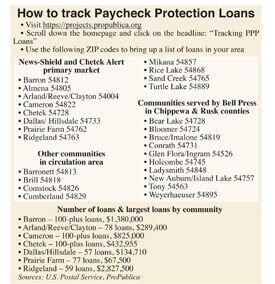 From as little as a few thousand dollars to as much as almost $3 million, hundreds of federal Paycheck Protection Program loans have been secured by businesses, nonprofit organizations and churches throughout the News-Shield circulation area throughout the COVID-19 pandemic.

An infographic accompanying this story shows how to find lists of PPP loans according to ZIP code.

As the pandemic continues, there is good news for Barron County business owners who are still feeling the negative effects.

Both the U.S. House of Representatives and the Senate have approved an extended deadline for businesses to file for a second round of PPP loans, according to Luke Kempen, director, Small Business Development Center at the University of Wisconsin-Eau Claire.

The bill will “extend the PPP loan application deadline from March 31 to May 31,” Kempen said Monday, March 29. “As of 1 p.m. today, (President Joe Biden) has not yet signed this into law but is expected to this week.”

According to Bruce Rasmussen, vice president for commercial banking at CCF bank, Barron, the latest round of PPP loans will be made according to the following guidelines:

The loan will be fully forgiven if borrowers meet the following conditions in the period of time (eight to 24 weeks) after they get the money:

• Maintain their existing workforce at its existing rate of pay.

• Spend the money only on payroll costs and “other eligible expenses” such as mortgage payments or necessary improvements.

• Spend at least 60 cents of every loaned dollar to pay workers.

Borrowers are eligible for a second loan if they can prove:

• The money they received was (or will be) used only for authorized purposes.

• They employ fewer than 300 workers.

• They can prove a reduction of at least 25 percent in gross receipts between comparable three-month quarters in 2019 and 2020.

Keeping people on the job

Born in the aftermath of an almost complete shutdown of “non-essential” businesses in Wisconsin and across the U.S., the Paycheck Protection Program was intended to preserve jobs until the businesses could reopen. In Barron County, the hardest-hit included bars, restaurants and related hospitality businesses whose walk-in trade dried up in mid-March 2020 and didn’t come back until a legal challenge by Wisconsin legislators was upheld by the state Supreme Court shortly before Memorial Day 2020.

But, in many cases (especially small restaurants) the damage done during the shutdown was permanent, leading to the sale or closure of businesses throughout the area.

By the end of April 2020, three lenders in the News-Shield circulation area (WESTconsin Credit Union, Security Bank, Ridgeland and Sterling Bank, Barron) had approved some 500 loans worth tens of millions of dollars to help keep jobs in place at businesses, farms, nonprofits and (in some cases) even church congregations.

According to ProPublica, Wisconsin lenders have issued more than 130,000 PPP loans in the past year, more than 16,000 of which went to businesses in amounts of $150,000 or less. However, ProPublica also reported that 167 Wisconsin borrowers got loans of $1 million or more.

“To say this money was essential to keep them alive is spot on,” he added. “I can’t emphasize enough how much it helped small businesses – especially those with 10 employees and under. The vast majority wouldn’t have survived.”

Armstrong said that one of the approved PPP loans went to the Economic Development Corporation, itself. The EDC is an independent nonprofit that operates out of the Barron County Government Center.

“Last week I talked to a Barron County restaurant owner that used the PPP loan to keep her employees on her payroll,” he said.

“During the shutdown, they did takeout and other things to try to keep things going until business picked back up. She wanted to help her employees by keeping them working and paid and her business operating. What she did was exactly what the PPP loans were for.”

Local and state sources both said that one of the biggest concerns is how to make sure the loan money is being spent as it was intended – especially to save jobs during tough times and prevent workers from going on the unemployment rolls.

“I don’t think there were abuses,” Armstrong said. “Once the federal government begins to audit the loans, there are clawbacks written (into the legislation),” he added.

If an audit shows that a borrower did not spend the money as intended, the government has a right to recover the funds, he said.

“But as far as widespread auditing, who knows how long that will take?” Armstrong said.

Kempen said the next round of lending will be more focused on the businesses that can prove they suffered hardships during the pandemic.

“Unfortunately, in the first round of PPP loans last year, many businesses that continued to prosper … received loans when, in hindsight and reality, they did not need them,” he said.

“This has allowed the program to be implemented rapidly and allowed local businesses to work with local lenders to get immediate access to funds,” he said. “Approval of (loan) requests, monitoring of compliance to program requirements and navigation of the PPP Forgiveness process will continue to be a joint effort between the SBA and the local lending institutions,” he added.

Rasmussen said that frequent rule changes have been a frustration for borrowers and lenders alike, but, even so, “PPP has been a program that indeed has assisted many small businesses.

“The burden of the proof for being responsible for the loan conditions is with the borrower, however, the lender needs to also complete a due diligence on the conditions,” he added.

School issues and a few local races headline the ballot on April 6th; The deadline has been extended for the SBA’s Paycheck Protection Program…